When you book with an account, you will be able to track your payment status, track the confirmation and you can also rate the tour after you finished the tour.
Sign Up
1410

Why Book With Us?

Arrival to Vilnius. Transfer to the hotel. Sightseeing tour with a qualified guide in the Old Town, where you will take a walk in cobblestone streets, on vibrant yet romantic spirit of the past. By the way, in 1994 Old Town was included in UNESCO World Heritage List. You will visit Vilnius Cathedral and the Cathedral Square, the Royal Palace, the Presidential Palace, Vilnius University, Amber Museum-Gallery, and the Gates of Dawn.

In the evening, dinner will be waiting for you in the traditional Lithuanian restaurant or lovely dinner at TV tower restaurant which is located 165 meters height (for an additional fee, ordered in advance). Overnight stay at the hotel.

Breakfast. During this day, you will get to visit Trakai town – it’s one of the most prominent tourist destinations. The legendary Lithuanian royal residences, impressive blue lakes, scenic coastline, castles are all preserved here in Trakai. You will continue sightseeing Trakai Island Castle *. It’s an impressive island of Lake Galve which is the symbol of the city Trakai. It is the only castle in Eastern Europe, built on the island, and one of the most visited architectural sites in Lithuania. There is Palace in the island, where Trakai History Museum is located.

After excursion in Trakai Castle, we try out the Kariam’s national and very popular meal called “Kibinas”, in local Karaim’s restaurant.

After lunch, you will go to Druskininkai. Druskininkai is the oldest resort in Lithuania. Curative local status was granted in 1974. Now,  this resort is prized for its healing springs. Mineral water is used for drinking and various procedures. There are many spas, villas, hotels, cafes, walking trails installed. For years, there were a large number of sanatoriums and spas operating.

We will arrive at the hotel in which you can order for extra charge various message types or health treatments and just before you go for dinner you will relax and recover your strength after the trip from Vilnius.  Important to know: all spa services you need to order 1 day before the arrival to Druskininkai town. All the prices list of spa treatments and massages you will get on a first day of your trip. Overnight stay at the hotel.

Breakfast. After breakfast, we will begin our sightseeing tour of Druskininkai town. We will start at the Virgin Mary Church, which was built in 1931., Reminiscent of St Anne’s Church in Vilnius. Inside, the nave is covered by 3 stellar vaults, the church is decorated with beautiful stained glass windows.

After lunch, you will go to Grutas Park *, which is located 5 km. from Druskininkai. Grutas Park was opened in Grutas village since 2001. It exhibits all of the Soviet idols sculptures gathered from all over Lithuania. 20ha park territory exhibits 86 pieces by 46 authors. This is a unique phenomenon. Most statues in the park are Lenin because in soviet times even a small town had to have “their Lenin statue”. The park also features a wooden building of the museum, which accumulated in the Soviet period, a documentary that tells about the Soviet government policies and propaganda. In 2010, world-famous travel guide Lonely Planet, mentioned Grutas Parks as the world’s museums eccentric parks. Later, it was awarded the 4th place.

For those who don’t want to go to Grutas Park, we will offer an extra bonus visit to Druskinininkai Water Park**. This exceptional recreation has 22 baths, water entertainment complex.

Next on the same day we are moving towards Kaunas city. But there will a short stop in Punia wood. Please note that this visit is possible only during the summer season, when it will still daylight.

When we arrive in Kaunas, you will be accommodated in the hotel which close to the old town. During this evening, you will have the opportunity to have exciting excursion “The Ghosts of Kaunas old town”**.  Or you can go to the local food restaurant which can easy find in the main pedestrian street in the old town. Please note: if you wish to participate the evening excursion you need to order this in advance with all your tour package.   Return to Vilnius. Overnight stay at the hotel.

Breakfast. After the breakfast, we will start exploring the city. We shall begin from Kaunas Castle. This is one of the most visited places in Kaunas – the impressive remains of the castle. The architectural point of view, Kaunas Castle is considered the oldest stone castle in Lithuania. In 1361, Kaunas castle was mentioned in written sources for the first time. Kaunas Castle is located in Kaunas region tourism information center. The castle often hosts various cultural events and festivals. St. Jurgis Church and Bernardine Monastery is one of the oldest remaining building in Kaunas it is our next object of this excursion. The interior remained significant Renaissance and Gothic elements. Seminary. Its history began after 1863 rebellion. Motiejus Valanciaus, Antanas Baranauskas, Maironis, Vaizgantas worked in Kaunas. Kaunas Town Hall Square. This is one of the most beautiful and most famous buildings in Kaunas Old Town. House of Thunder. It is the oldest residential building in Kaunas. This house was built in XV century. It was thought that the building was formerly a temple dedicated to the God Thunderer. Currently, the House of Thunder runs Jesuit High School Library. Vytautas the Great Church is located in a very beautiful place – on the right bank of the Nemunas river. It is believed that in 1400 Vytautas the Great built a wooden church first. This church was ruined many times by fires, military, and even the Nemunas river during spring time. Vilnius street. The most beautiful street of the Old Town combines the old and the new town. Now it’s Peace alley where you will see buildings of XVI century and unique phone booths. It is located near the historical and Lithuanian Presidency. Liberty Avenue. This is the central street of the town. There are many city agencies, lots of greeneries, historical buildings, art monuments, shops, souvenir shops, cafes and bars in this street. Vytautas the Great War Museum Garden. Before Independence, there has been a place of trade. During the interwar period, it had a number of garden sculptures for various Lithuanian heroes. Then we can have lunch in one of the Kaunas restaurants.

After this tour in Kaunas we are moving to Rumsiskes village which on the way back to Vilnius. Here we will visit Open Air Museum of Lithuania. Is a unique and one of the largest (195 ha) open-air ethnographic museums in Europe. It has the biggest quantity of exhibits (140 buildings and over 88 000 mobile exhibits). The museum presents the mode of life, works, and traditions of peasants and townspeople of all Lithuanian ethnographic areas: Dzukija, Aukstaitija, Suvalkija, Zemaitija and Lithuania Minor.

Here you will great opportunity to get know better with our customs and way of life for many years ago.

Next we are getting back to Vilnius city. Free time. Overnight in the hotel.

After the breakfast, you are going to Vilnius airport for your flight back to your home.

I'm a solo traveller, is there a single supplement?

The price for single supplement is 140 EUR

Which currency is most widely accepted on this tour?

Should I book pre/post additional services?

Additional services must be booked in advance. This may not be possible during the trip.

Spend a Holiday With Your Family in Lithuania – 4 Days 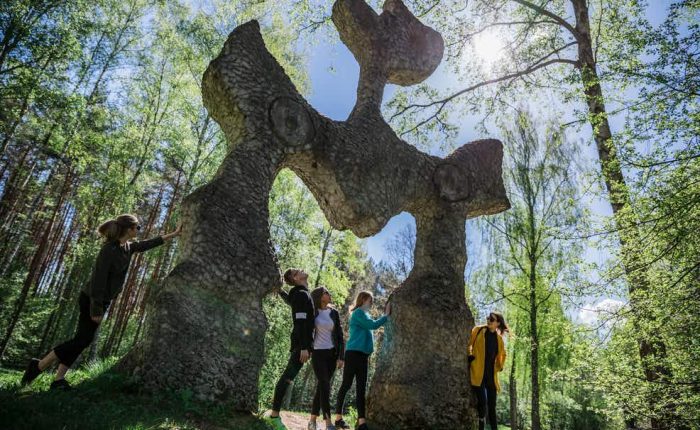